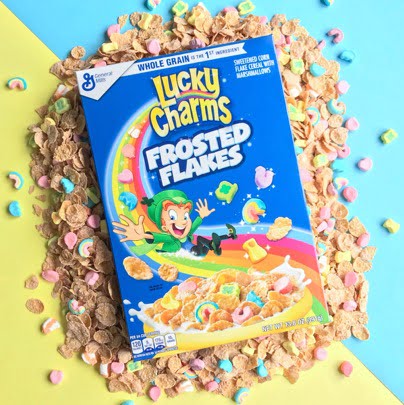 For much of the country, the new year brought in winter storm warnings and bitter cold temperatures.  However, the arctic blast has nothing on the seemingly chilly relationship between a couple of cereal giants; bestowing one last holiday surprise upon consumers.

After speculation that it may be a ruse, on December 29th, General Mills officially announced the launch of its latest cereal, Lucky Charms Frosted Flakes.  Sugary cereal lovers everywhere rejoiced on social media as the news spread and the cereal began appearing on supermarket shelves.  Two classic childhood cereals combined…what’s not to love?  Well, we suspect Kellogg, Corp., the distributor of Frosted Flakes, is not feeling so GR-R-REAT about the latest breakfast sensation that is taking the internet by storm.

Frosted Flakes is probably one of the most iconic cereal brands in the US.  Most everyone can recognize the product from just a glance of the blue box baring the lovable Tony the Tiger, who first debuted back in 1952.  So, with such an established brand, how is it that General Mills can so blatantly use the name of a Kellogg product?  As it turns out, unlike “Kellogg’s Frosted Flakes,” “Frosted Flakes” is not a registered trademark in the cereal or breakfast food categories.  This is likely because the term “frosted flakes” is merely descriptive; that is to say, the words themselves describe exactly what the product is.  Descriptive names are generally not granted federal trademark protection.

Fortunately for Kellogg, it is not without some recourse should it wish to pursue legal action against General Mills.  Trade dress protects the appearance of a product or its packaging under federal and state unfair competition laws, even without formal registration (though registration is recommended).  In this case, rather than the traditional red Lucky Charms box, General Mills’ newest member of its cereal line is blue – strikingly similar to Kellogg’s Frosted Flakes box.   Kellogg therefore may have a good argument that consumers, seeing the words “frosted flakes” combined with the blue box, would be confused by the source of the product.

This is the second time in just a matter of months that Kellogg has been involved in some sort of cereal box controversy, and it will be interesting to see if and how it responds to General Mills’ actions.

If your company is launching a product or creating new ad content, be sure to hire counsel with experience with intellectual property protection laws.  Please email us if you have any questions or if you would like more information regarding the content above.

Copyright © 2020 Phillips & Sutherland, LLP. The information provided on DigitalLawGroup.com and any of its pages, blogs, social media accounts, etc. (“Site”) is provided by Phillips &amp; Sutherland, LLP for informational purposes only and not for the purpose of providing legal advice. If you would like legal advice, please contact our attorneys. Use of the Site does not create an attorney-client relationship between the user and Phillips &amp; Sutherland, LLP. Moreover, submissions sent through any forms or inquiry pages on the Site do not alone create an attorney-client relationship; however, inquiries are confidential except as provided in our Privacy Policy.